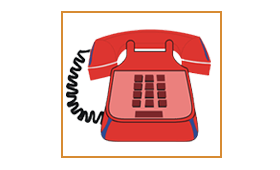 The telephone is a telecommunications device which is used to transmit and receive sound (most commonly speech). Most telephones operate through transmission of electric signals over a complex telephone network which allows almost any phone user to communicate with almost any other The telephone handles two kinds of information: signals and voice, at different times on the same twisted pair of wires. The signaling equipment consists of a bell to alert the user of incoming calls, and a dial to enter the phone number for outgoing calls. A calling party wishing to speak to another telephone will pick up the handset, thus operating the switch hook, which puts the telephone into active state or off hook with a resistance short across the wires, causing current to flow.

The telephone exchange detects the DC current, attaches a digit receiver, and sends dial tone to indicate readiness. The user pushes the number buttons, which are connected to a tone generator inside the dial, which generates DTMF tones. The exchange connects the line to the desired line and alerts that line.

When a phone is inactive (on hook), its bell, beeper, flasher or other alerting device is connected across the line through a capacitor. The inactive phone does not short the line, thus the exchange knows it is on hook and only the bell is electrically connected. When someone calls this phone, the telephone exchange applies a high voltage pulsating signal, which causes the sound mechanism to ring, beep or otherwise alert the called party. When that user picks up the handset, the switch hook disconnects the bell, connects the voice parts of the telephone, and puts a resistance short on the line, confirming that the phone has been answered and is active. Both lines being off hook, the signaling job is complete. The parties are connected together and may converse using the voice parts of their telephones.

When a party "hangs up" (puts the handset on the cradle), DC current ceases to flow in that line, thus signaling to the exchange switch to disconnect the telephone call.History Credit for inventing the electric telephone remains in dispute. Antonio Meucci, Johann Philipp Reis, Alexander Graham Bell, and Elisha Gray, among others, have all been credited with the invention.

The early history of the telephone is a confusing morass of claim and counterclaim, which was not clarified by the huge mass of lawsuits which hoped to resolve the patent claims of individuals. The Bell and Edison patents, however, were forensically victorious and commercially decisive.

1874-Meucci, after having renewed the caveat for two years, fails to find the money to renew it. The caveat lapses.

11 February 1876 - Gray invents a liquid transmitter for use with a telephone but does not build one.

14 February 1876-Elisha Gray files a patent caveat for transmitting the human voice through a telegraphic circuit.

19 February 1876-Gray is notified by the U.S. Patent Office of an interference between his caveat and Bell's patent application. Gray decides to abandon his caveat.

7 March 1876-Bell's U.S. patent 174,465 "Improvement in Telegraphy" is granted, covering "the method of, and apparatus for, transmitting vocal or other sounds telegraphically by causing electrical undulations, similar in form to the vibrations of the air accompanying the said vocal or other sound."