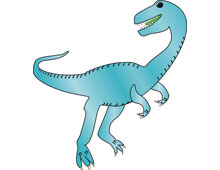 Troodon was probably the smartest of the dinosaurs, with a relatively large brain for its body size.

Its name means "wounding tooth," and that is what it was originally known from -- a single tooth. Later, more complete skeletons were found, and it was discovered that Troodon had different types of teeth in different parts of its jaw, much as humans do.

Troodon was a lightly built dinosaur with a head sort of like a bird, and eyes that faced forward, like those of other hunters. It had hands good for grasping