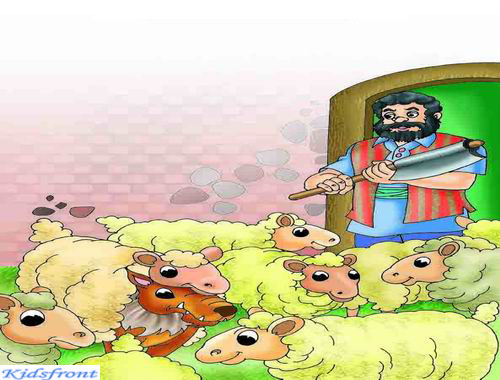 Once a wolf was roaming around in a forest in search of a prey. He came near a village that was located at the edge of the forest. There he saw a flock of sheep grazing in a pasture.

While he was planning to kill a sheep, he found a sheep-skin lying by the foot-path. Seeing the sheep-skin, a wicked idea clicked him.

He thought of wearing it and slipping into the flock because then, it would be easy to get a prey.

When the wolf got into the flock, the shepherd drove it to the village. Reaching there he enclosed it in the pen and shut the door immediately. Just then his wife came there and said, "Today I have nothing to cook for dinner. So, kill one sheep for me."

The shepherd went into the pen and looked for a meaty sheep. Mistaking the disguised wolf for a sheep, he killed him with an axe.

The wickedness is its own punishment. The wolf wanted a sheep as his prey but himself became the food of the shepherd.

Cost Of The Bell

Who Will Eat The Hay ?